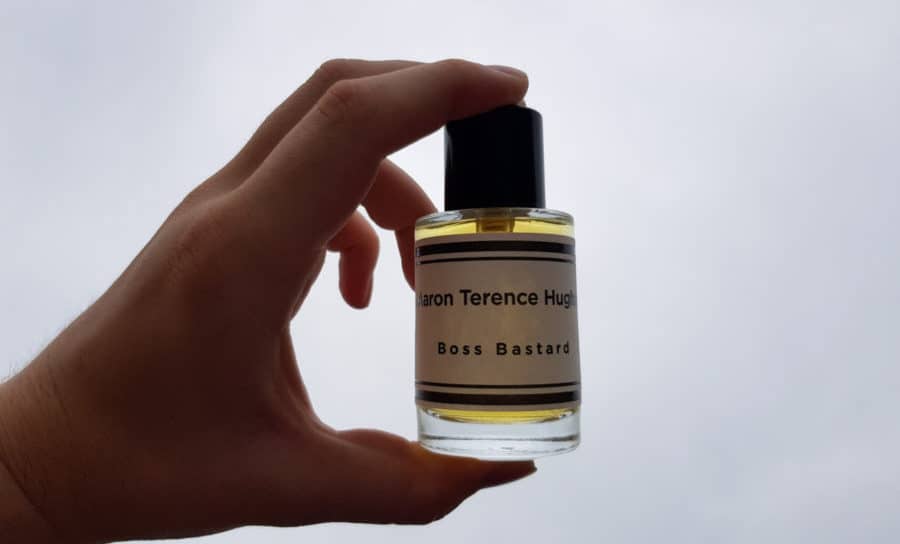 About Aaron Terence Hughes And His Brand

Aaron Terence Hughes is an independent perfumer from the United Kingdom. This means he works on his own and the only person that limits or directs him is himself. This allows Aaron to create some truly magical fragrances with unique and daring scents.

Aaron himself is a very caring and unique person. Although Aaron has been making perfumes for a long time, I personally got to know him after he appeared on a YouTube video by FragMental: ‘Meet the perfumer| Aaron Terence Hughes‘. This video eventually sparked Aaron to start his own channel, which has been growing rapidly. On his channel, he reviews fragrances. However, Aaron is a perfumer and he has a much different look at fragrances. He goes so in-depth and knows so much, its astonishing. I highly recommend everyone to watch his reviews, as he has such a technical, but also a personal look at fragrances that you just can’t find anywhere else.

On his channel, you can also see Aaron as a person, which is always nice to see. As I said before, Aaron is a caring person, and it shines through in his fragrances. For example, he created a fragrance called Anubis, of which 80% of the proceeds go to his favorite charity, the Soi Dog Foundation. Another one of his fragrances called Zeus also has 80% of the proceeds going to charity, this time, a mental helping center.

Besides his charity work, Aaron also uses only ethical and natural ingredients. Notes such as civet or castoreum will not be used in his fragrances, although he does use ethically farmed ambergris.

Overall, Aaron himself is an amazing person and it shows in his brand as well. This, however, is a review of his fragrance Boss Bastard, so we will get into the actual scent itself!

The Scent Of Boss Bastard

Aaron Terence Hughes’s Boss Bastard is a truly fantastic fragrance with a rich, slightly sweet, but also somewhat fresh scent. Aaron classifies this fragrance as a unisex fragrance, working both great for men and women. However, in order to best understand how a fragrance smells, it’s important to know the note-breakdown.

The top notes of Aaron Terence Hughes Boss Bastard are bergamot, lemon, and mandarin. The middle notes are cedarwood, amber, and honeyed tobacco. The base notes are cocoa, vetiver, sandalwood, and musk.

When I designed this I had watched Leonardo Dicaprio in the film The Wolf of Wall street, I was inspired by him sitting in a leather chair smoking a Cuban cigar giving zero f*cks. A total Boss Bastard!

This quote from Aaron’s website perfectly sums up this fragrance, as it captures both the ‘Boss’ feel, as well as the slightly sweet scent of tobacco that is so prevalent in this fragrance. It should also be noted that Boss Bastard does not have a filthy undertone to it, making it extremely easy to wear by anyone.

When you first spray on Boss Bastard, you’re immediately greeted by a rich scent of honey and tobacco. These create a sweet and lovely scent that will continue on all throughout the fragrance. However, the opening also possesses a few citruses. Hints of lemon, mandarin, and bergamot give the fragrance a vibrant and fresh feel and perfectly blend in with the sweeter honey and tobacco.

Over time, I personally didn’t notice the fragrance changing too much anymore. Every now and then I did pick up some woody notes, but relatively faint. I mainly got this truly gorgeous scent of fresh and sweet tobacco and honey. And besides smelling just sweet, the fragrance also provides you with a warm feeling.

Overall, this fragrance definitely smells fantastic, and it surely delivers on its name as well. Wearing this fragrance will make you feel confident, professional, and overall just like a million bucks. It’s safe to say that Aaron’s inspiration of the Wolf of Wallstreet has been done justice with this juice.

When Can You Best Wear Boss Bastard

Boss Bastard is one of those fragrances that, in my eyes, will fit you well everywhere you go. The sweet and rich scent will work perfectly during the winter and fall, but due to the fresh aspect of citruses, it will also work well during the spring as well. You could even wear this on a cool summer night if you’d like!

Throughout the year, Boss Bastard will work well pretty much all the time. As you can imagine, a fragrance inspired by the Wolf of Wallstreet is a fragrance that you can wear in a formal setting, in the office, or in any other business-related setting. Here, the fragrance will provide you with a luxurious aroma, portraying confidence and class.

However, confidence and class aren’t only for a formal setting. Coming across as a confident, put-together man or woman will benefit you everywhere you go. This makes Boss Bastard a great fragrance to wear casually as well. Whether you’re hanging out with friends, running errands, or relaxing at home, a scent like this will always fit you. Furthermore, this is also a fragrance that can be worn by any man or woman, regardless of age.

Besides casual and formal daytime wear, this fragrance also shines in a nighttime setting. The overall feel of this fragrance is a luxurious, successful one, which works great during a formal dinner or even on a date. You’ll certainly impress the other people you’re with without overpowering them. A luxurious aroma such as this will simply never be out of place.

The Performance And Longevity Of Boss Bastard

Boss Bastard is a fragrance with 20% concentration. Simply put, this fragrance is strong and will last a long while. The very first time I tried Aaron Terence Hughes Boss Bastard, I went with one spray on my arm. This was a rather weak spray, as the fragrance was new and the atomizer had to be pumped. However, even this one little spray lasted me well over 8 hours.

It’s also one of those fragrances that’s very, very strong, but not in an overpowering way. When you wear this fragrance, the people around you will most certainly notice it. This fragrance has massive projection and longevity, which is something Aaron continuously pushes.

There’s no good in a fantastic fragrance with poor performance, and we all know it. Luckily, Aaron makes fragrances that will last you a LONG time without making them overpowering or cloying. It really shows off his talents as a perfumer!

How Are The Packaging And Presentation 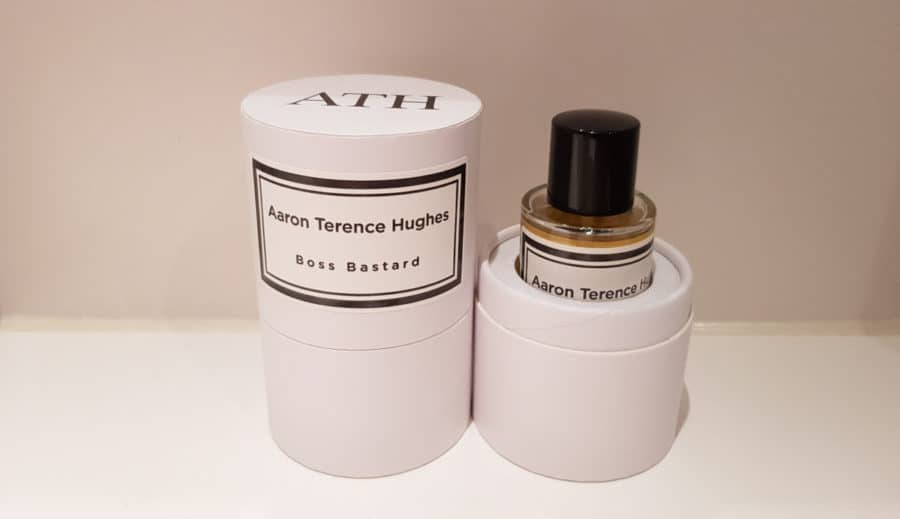 Aaron Terence Hughes’s fragrances are packaged rather simply, and Boss Bastard is no exception. Upon arrival, you’ll receive a round, white-carton box. Here, you can take the top off to reveal the fragrance itself, which sits snuggly in the lower part of the box. The bottle itself is surrounded by some sort of foam, ensuring that the bottle will not be damaged.

The bottle itself is a fairly standard fragrance bottle. You’ll get a 50ml glass bottle with a  white label and a black cap. Although simple, the minimalistic design is quite pleasing. Of course, the bottle is not the most important part of a fragrance, but a nice looking bottle definitely won’t hurt. Aaron’s bottles are simple, yet delightful. And the juice inside, as mentioned above, is fantastic!

Aaron offers both 50ml and 10ml bottles of most of his fragrances. Above I described the presentation of a 50ml bottle. A 10ml bottle, however, will not come in the white box. At least, I received some 10ml’s extra with my order and they just lie in the shipping box. The bottle itself is just a smaller version of the 50ml bottle and looks equally nice!

Final Verdict; Is Aaron Terence Hughes Boss Bastard Worth It

Aaron has truly hit this one out of the park. Boss Bastard is one of my most recent purchases and is already becoming one of my favorite fragrances in my collection. The elegant, luxurious, and rich scent of tobacco, honey, and citruses is something I just cannot seem to get enough of.

Also, I’ve reviewed a few more Aaron Terence Hughes fragrances. You can find a full list of reviews by following this link!

Aaron Terence Hughes is a British independent perfumer who's becoming more and more popular lately. One of his more controversial and hyped releases is his fragrance called Sl*t, but is this...

Continue Reading
link to Fragrance One Date For Men, A Complete Review

Fragrance One might be one of the most polarizing fragrance brands out there. Since this is the brand of popular YouTuber Jeremy Fragrance, people tend to give negative comments on the fragrance...