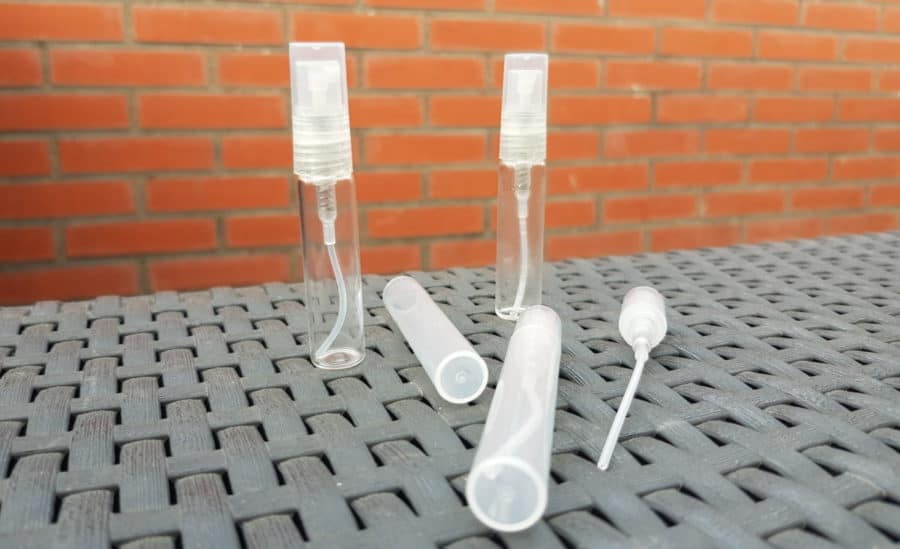 Fragrances can be expensive. And with so many different ones on the market, you cannot possibly buy a full bottle of every single one of them. Luckily, you can buy decants to try out more fragrances at a cheaper price.

What are fragrance decants? Fragrance decants are small fragrance bottles that have been filled up with a fragrance. The decant seller purchases a large bottle and divides that into multiple smaller ones. These are then sold for a cheaper price than you would find in retail.

What Are Fragrance Decants And Why You Should Consider Them

A fragrance decant is a small bottle filled up with a fragrance. These small bottles are then sold for a fair price. This price is usually below the market norm. But how are the sellers able to sell these fragrances below the normal price?

The reason for this is that the sellers purchase their fragrances from the grey market. Products on the grey market go below the normal market price. Maybe the seller purchases in a different country where the fragrance is much cheaper. Using these methods to purchase the fragrance for a cheaper price, allows the seller to sell them for a little cheaper as well. Now they are under the normal market price but still make a very good profit.

Another thing these sellers do is they purchase the largest bottles available. You’ve probably noticed that the price difference between a 50ml and a 100ml isn’t that much, even though you’re getting twice as much. A larger bottle means a lower cost per ml. The larger you go, the lower the cost per ml. A 250ml bottle is much cheaper than a 50ml when you compare the amount of ml’s you’re getting.

So the decanter has purchased the largest bottle, presumably on the grey market. They now have a bottle of a certain fragrance with a very low cost per ml. This person can now divide the large bottle into multiple smaller ones. A common size for decants is 5ml, but you also see 2ml, 3ml, or even 10ml quite regularly.

Of course, there is always a small risk of you purchasing a fake decant, but most of the times, the people selling fragrance decants just want to make a little extra money, or they are tired of a certain fragrance and decide to sell it to raise some money for their new purchase. The risk of getting a fake fragrance is really low.

The Main Benefit Of Fragrance Decants

Because the seller has acquired the fragrance quite cheap, fragrance decants are usually a little cheaper as well. These decants basically give you the opportunity to try multiple fragrances without having to pay retail price on a bunch of large bottles.

There are so many different fragrances on the market right now, it is almost impossible to try them all out. Now luckily, there is a good chance you don’t like every fragrance in existence. This narrows it down a bit, but there are still so many out there, you’d need to spend a fortune to try them all.

And many of these fragrances are really expensive. Fragrances from the houses of Tom Ford and Creed can easily cost you $300 or more. Instead, you can go for a decant. These are much, much cheaper. Yes, you will get a smaller version, and you won’t receive the original bottle, but still, this is worth it.

You purchase a fragrance for its scent. And that is exactly what you’re getting with a decant. A much smaller and cheaper version of a fragrance.

The Best Places To Buy These Fragrance Decants

Decants are sold in many places. You can find them on eBay, on Facebook groups, and on dedicated websites.

When you look up decants on eBay or on Facebook groups, you will find many different decants. There is a pretty good chance that you find what you’re looking on one of those platforms. However, you always risk getting fakes. On these platforms, anyone can sell their stuff. This includes that anyone can sell their fragrances. And there are always a handful of people who want to sell fakes just to make some money.

Whenever you do decide to buy from eBay or Facebook, make sure to check out the seller and always pay via PayPal. PayPal has a very good customer protection service, so if you get scammed, you can almost certainly get your money back.

Another way to purchase fragrance decants is to purchase them from websites dedicated to selling decants. A great website for this is The Fragrance Decant Boutique. They have a wide variety of different fragrances, from Creed to Chanel. If you’re looking for a fragrance decant, they probably have it.

These websites are a lot more trustworthy. Fake websites get exposed quickly, or a simple search can show you whether or not they sell the real stuff.

Which Fragrances Are Perfect To Buy As A Decant

But sometimes, a decant might actually be the better idea. An expensive fragrance, for example, might be better purchased as a decant. Instead of having to pay a large sum of money, just spend a little and get the same fragrance.

Some great fragrances to purchase as decants are fragrances from the houses of Creed, Tom Ford, or Amouage. Many of their fragrances are very expensive. However, you can purchase a decant of the same fragrance for a lot less.

Can You Make Your Own Decants

Making a decant is actually pretty simple. You only need a few things.

What you need to do now, is open up the empty bottle you’d like to fill. Then, you can spray directly into the empty bottle. Every 10 sprays are about equal to 1ml. You can keep count of the sprays till you reach the desired amount.

What To Do With Your Own Decants

Now that you have your own decant, you can decide what to do with it. Of course, the most logical thing to do is to sell them! You probably have at least one fragrance that you don’t really wear anymore. Put it up on eBay or on Facebook groups. See who is interested and sell them your own decants.

You can also share your fragrances with your friends. Give them a 5ml decant and decant one of theirs for you to try out. There are many things to do with decants. However, most people use them to build out their own collection. Sell a few of their own to make some money to buy a decant of a fragrance this person would like to try.

Fragrance decants are a wonderful thing. They allow you to try out multiple different fragrances for a cheap price. You can also make your own and sell them to make a little money on the side.

Overall, purchasing fragrance decants over a full bottle might be the better choice, depending on the fragrance, of course.