Cinnamon is a fantastic spice, not only in cooking but also in fragrances. With its spicy, sweet, and slightly warm scent, it can truly add a whole new dimension to a fragrance. But what are the best cinnamon fragrances for women?

What Are Cinnamon Fragrances And How Do They Smell

The note of cinnamon is an interesting fragrance note. It often provokes memories and is most commonly linked to the colder seasons. And when you think about it, that does make sense. Cinnamon is often used in cooking wintery dishes and its also a common ingredient in a Christmas dish. When you cook with cinnamon, the scent will linger around, therefore triggering your memories of those times.

The note of cinnamon isn’t often the main note in a fragrance, but it has more of a supporting role. Nevertheless, it’s still a noticeable note and it can truly add a new dimension to a fragrance. Below are some of the best cinnamon fragrances for women, in no particular order!

Scent: Amouage Fate For Women is a beautiful fragrance with a smoky, warm, and spicy scent. This fragrance opens with a rich scent of spices, including cinnamon and pepper. After a short while, you can start to notice a smoky aspect, which somewhat turns this fragrance into a unisex fragrance. The dry down of this fragrance mainly has a very sweet and slightly leathery scent, mixed with the established warm and spicy opening. This is truly a marvelous fragrance.

Notes: The top notes of Amouage Fate For Women are bergamot, cinnamon, pepper, and red chili peppers. The middle notes are labdanum, incense, narcissus, jasmine, and rose. The base notes are incense, castoreum, oakmoss, benzoin, leather, patchouli, and vanilla.

Best for: Amouage Fate For Women is a fantastic fragrance to wear during the colder months. This fragrance has a beautiful, rich, and deep scent that works so well with those lower temperatures. During those colder months, this fragrance makes for a great casual fragrance, but it’s also luxurious enough for formal wear. Overall, you just can’t really go wrong with a fragrance like this. If you’re interested in this fragrance, you can check it out over here on Amazon!

Scent: Rochas Femme Rochas is a fantastic fragrance with a fruity, warm, and spicy scent. This fragrance opens with quite a fruity scent. Added to this is the note of cinnamon, creating a ‘spicy fruity’ scent. After a little while, you can start to notice some floral notes, as well as some sweet notes. Notes like vanilla and amber truly give this fragrance a layer of depth, where notes like oakmoss and patchouli balance out the sweetness. This is truly a great fragrance, although it might not be for everyone.

Best for: Rochas Femme Rochas is a fantastic fragrance, however, the opening of this fragrance can be a bit pungent. Luckily, this mellows down to the beauty it is, but it could turn some people away from this one. Nevertheless, this is a great fragrance and it works best during the colder months, simply because this fragrance is a little too strong for the warmer weather. During those colder days, it’s best worn casually. If you’re interested in this fragrance, you can check it out over here on Amazon!

Scent: Dior Dolce Vita is a great fragrance with a spicy, woody, and warm scent. This fragrance opens with a fruity, sweet scent, along with a nice hint of spices. Quickly after this opening, the spices take the foreground and you can start to notice a beautiful scent of cinnamon. When this starts to dry down, notes of woods and vanilla start to make themselves known, adding a sweet, woody, and overall warm touch to the fragrance. This leaves you with a spicy, warm, and woody fragrance that smells absolutely gorgeous.

Notes: The top notes of Dior Dolce Vita are rose, bergamot, cardamom, grapefruit, peach, and lily. The middle notes are heliotrope, cinnamon, rosewood, lily, magnolia, and apricot. The base notes are cedar, vanilla, coconut, and sandalwood.

Best for: Dior Dolce Vita is a fantastic fragrance that is best worn during the transitional seasons, like fall and spring. During those seasons, it’s neither too warm nor too cold. This is the perfect time to wear a fragrance like this, that, although warm and spicy, doesn’t work too well when it’s really cold outside. However, during the transitional seasons, this is a fantastic signature fragrance that can be worn pretty much all the time. If you’re interested in this fragrance, you can check it out over here on Amazon!

Scent: Calvin Klein Liquid Gold Euphoria is a beautiful cinnamon fragrance with a warm, woody scent. This fragrance opens with an immediate blast of cinnamon, providing the fragrance with a spicy, sweet, and warm scent. After a while, you can start to notice the woodiness, coming in the form of sandalwood. This actually gives the fragrance a slightly sweet, but mostly warm scent. However, some might find this woody scent to be a bit too masculine. Nevertheless, this is a fantastic fragrance for the right woman.

Notes: The top note of Calvin Klein Liquid Gold Euphoria is cinnamon. The middle note is black orchid and the base note is sandalwood.

Best for: Calvin Klein Liquid Gold Euphoria is a great fragrance to wear during the spring and fall. With its woody and spicy scent, it’s perfect for those cooler, milder days. During those months, this fragrance is great for casual wear, but also for formal wear. As I mentioned before, some might find it to be a bit masculine, but, when you’re a confident, strong woman, you can pull this fragrance off and smell incredible. If you’re interested in this fragrance, you can check it out over here on Amazon! 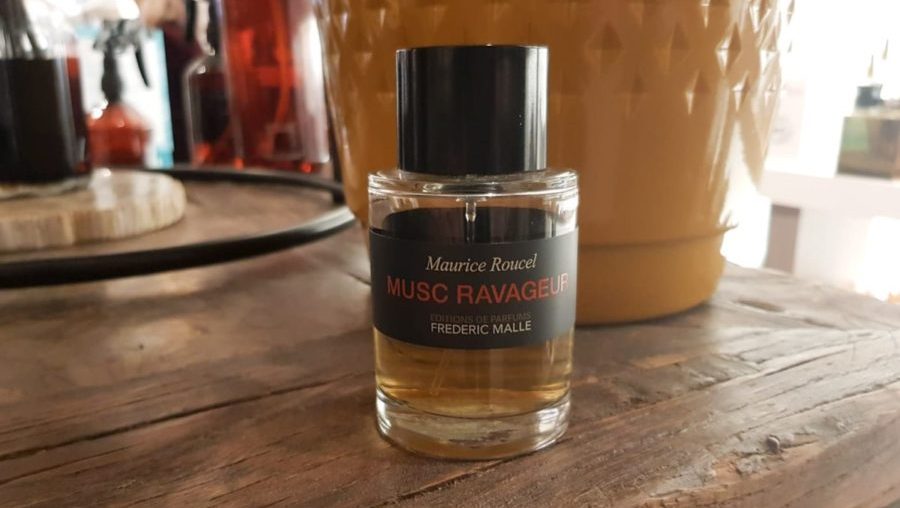 Scent: Frederik Malle Musc Ravageur is a beautiful fragrance with a warm, spicy, and sweet scent. This fragrance opens with a warm scent of spices and musk. Among those spices is the note of cinnamon, adding its sweet and spicy scent. After a little while, you can start to notice some sweet notes, like the notes of vanilla and tonka bean, as well as a warm touch of amber. Overall, you get a warm, sweet, and spicy fragrance with a lovely hint of cinnamon, mainly present in the opening.

Notes: The top notes of Frederic Malle Musc Ravageur are bergamot, tangerine, and lavender. The middle notes are cloves and cinnamon. The base notes are cedar, guaiac woods, amber, vanilla, musk, tonka bean, and sandalwood.

Best for: Frederic Malle Musc Ravageur is a fantastic fragrance to wear during the colder months. During those colder months, this fragrance works perfectly for any intimate moments, however, there is a ‘dirty’ aspect to this fragrance which might put some people off. Therefore, it might not be the best idea to wear this fragrance is a crowded environment. But, overall, this fragrance can be worn quite often, and when you do, you’ll thank yourself for it. If you’re interested in this fragrance, you can check it out over here on Amazon!

Scent: Lolita Lempicka L De Lolita Lempicka is a fantastic cinnamon based fragrance with a warm and sweet scent. This fragrance opens with a sweet scent of vanilla and cinnamon, providing the fragrance with both sweetness, as well as warmth. After a little while, this vanilla scent starts to become a little boozy even. There’s also a soft, citrusy undertone present, especially in the opening. However, with this fragrance, you mainly get a sweet, spicy, and warm fragrance that smells absolutely incredible.

Best for: Lolita Lempicka L De Lolita Lempicka is a gorgeous fragrance that works perfectly during the colder months. With its sweet, spicy, and warm scent, you’ll have a very approachable, welcoming, and overall cozy scent, which is exactly what you should be looking for in a cold-weather fragrance. During those colder months, you can wear this fragrance pretty much whenever you’d like. It works during the nights, during dates, or just for casual wear. If you’re interested in this fragrance, you can check it out over here on Amazon!

Should You Have A Cinnamon Fragrance

Cinnamon fragrances are something special. With their lovely scents, as well as the generally very pleasant and cozy atmosphere they bring, owning a cinnamon fragrance is never a bad idea.

Not only can they set a great mood, but they’re also very versatile. A cinnamon fragrance is great for just casual wear, but most of the time, they’re also great for formal occasions. And, to top it off, they’re some of the best fragrances to go for during a festive, crowded occasion.

The house of Diptyque has so many incredible fragrances, lots of them very unusual using uncommon fragrance notes and spices. With such a large collection of intoxicating fragrances, it begs the...

Le Labo is best known for its wonderful fragrances and its unique designs. But out of their many different creations, you might wonder, what are the best Le Labo fragrances for men? The House Of...