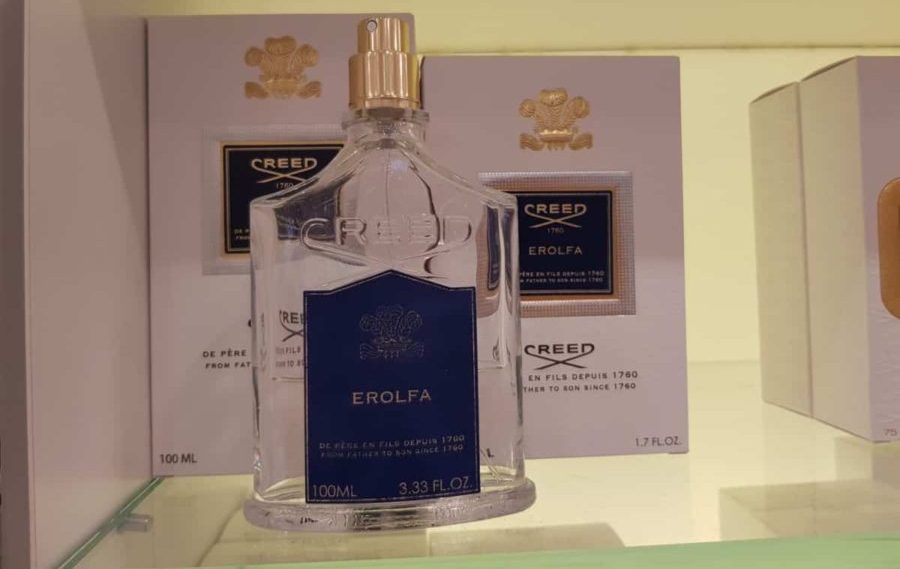 The house of Creed is well-known for its fantastic fragrances. However, a Creed fragrance can cost you quite a lot. Luckily, most fragrances have a few clones. These are fragrances with a similar scent and vibe, but they’re a lot cheaper. So what are the best Creed Erolfa clones?

The Scent Of Creed Erolfa

Creed Erolfa is one of the lesser-known fragrances from the house of Creed. Nonetheless, it is regarded as a slept-on beauty. The house of Creed introduced Creed Erolfa to the world in 1992, as a masculine, fresh, aquatic fragrance. This fragrance was inspired by the trips to the Mediterranean by the Creed family. To be more specific, it’s inspired by the memories of sailing the Mediterranean sea. Another ode to these memories is the actual name of this fragrance. The name ‘Erolfa’ is a combination of the names of the family members. Perfumer Olivier Creed names this fragrance after his son, Erwin (Er), his daughter, Olivia (Ol), and his wife, Fabienne (Fa). When combined, it creates the name Erolfa, a fragrance by the house of Creed.

When we take a look at the notes and the scent they provide, you can understand that this fragrance is inspired by a warm, coastal place. The top notes of Creed Erolfa are bergamot, lemon, orange, violet, cumin, basil, rosemary, and melon. The middle notes are cyclamen, jasmine, ginger, coriander, and pepper. The base notes are cedarwood, sandalwood, moss, amber, and musk.

With the inspiration behind this fragrance, it should come as no surprise that this is a fresh, aquatic fragrance with some citrusy notes. The opening of this fragrance is fresh and a little fruity. There’s this nice citrusy scent, mixed with some herbal notes. This creates a fresh, coastal feeling, which smells amazing. All the while, you’ll also experience a nice, aquatic scent. This freshness from the aquatics, citruses and herbal carriers on for a while. Added to this is a salty undertone, creating the feeling of a salty ocean. The dry down of this fragrance adds some woods and musks, but you mainly get a fresh, aquatic, salty scent with an herbal and fruity undertone.

A fragrance like Creed Erolfa is simply perfect for the summer. The freshness goes so well with high temperatures. It works great as a casual fragrance, but honestly, you can’t really go wrong with this fragrance. The fruity, saltiness makes it work during the nights as well, and the overall clean, fresh scent is also great for formal wear. If you’re interested in the original Creed Erolfa, you can check it out over here on Amazon!

These fragrance clones have a striking resemblance with a certain, expensive fragrance. However, it should be noted that, although these clones are very similar, they’re not the same. They do give you a solid picture of what to expect from the more expensive one, but they’re not the same. It is more of an alternative, instead of a replacement. However, some clones are so similar to the one they’re modeled after that it’s difficult to smell a difference, especially for the untrained nose. Purchasing a clone of a certain fragrance can be a great idea if you’re looking for a similar fragrance without having to pay a large sum of money, though!

Some Fragrances Simply Don’t Have That Many Clones

Nowadays, almost every popular or expensive fragrance has at least one clone. However, there are a rare few fragrances that don’t have a clone or only have one or two that come close.

Recreating a fragrance isn’t the easiest thing to do. There’s a reason that these clones are no replacement, but merely alternatives. Sometimes, a fragrance is crafted in such a way that it is near impossible to reverse engineer it and create the same. This isn’t often the case, but as for Creed Erolfa, it sadly is. Creed Erolfa doesn’t really have a clone like most other Creed fragrances. However, there are a few fragrances that are somewhat similar. These don’t have the same scent, but they are quite close in the overall vibe of Creed Erolfa.

Below are two fragrances that you could use as a substitute for Creed Erolfa. However, if you want to experience the true Creed Erolfa scent, you really need to purchase the real one. These two fragrances are not as similar as most clones are to a certain fragrance. Nevertheless, these two are great fragrances in and of itself.

1. Usher Raymond UR For Men

Scent: Usher Raymond UR For Men is a fragrance that shares some similarities with Creed Erolfa. This fragrance opens with an herbal and aquatic scent. There’s also a synthetic smelling fruity scent in the opening, which isn’t that nice. Luckily, it quickly fades away. After a little while, you get a nice, salty scent, which goes great with the already established herbal and aquatic scent. The dry down of this fragrance adds some woody notes, adding a nice base to the fragrance.

Why it is so similar: Usher Raymond UR For Men is more or less a dumbed-down version of Creed Erolfa. The opening in this fragrance is somewhat similar, however, Usher Raymond UR For Men is missing the citrusy scent. There is a similar aquatic scent, with the added salt. The fruitiness in Creed Erolfa also smells much more natural when compared with this one. Even though there are a few differences, not everyone would be able to smell a huge difference between the two. This fragrance also costs only a fraction of what Creed Erolfa costs. If you’re interested, you can check out the current price over here on Amazon!

Scent: Nautica Voyage is one of the best-known aquatic fragrances. With a slightly fruity, green opening, you really get this nice coastal vibe in the opening. After a while, you can notice a heavy emphasis on the aquatic side of this fragrance. There’s also a nice floral note mixed in with the aquatic scent, which adds a nice playfulness to the fragrance. The base of this fragrance adds a woody note, as well as a salty musk scent. Truly a great fragrance.

Notes: The top notes of Nautica Voyage are green leaves and apple. The middle notes are mimosa, lotus, and marine notes. The base notes are cedarwood, oakmoss, musk, and amber.

Why it is so similar: Nautica Voyage is not necessarily a clone of Creed Erolfa, but it is a fantastic replacement as another beautiful aquatic fragrance. Both fragrances do have this nice, coastal opening with a great aquatic scent, but that’s where the comparisons end. Nautica Voyage won’t really give you a good impression of what Creed Erolfa smells like, but more of an impression of what a fantastic aquatic fragrance smells like. This fragrance is also much, much cheaper. If you’re interested, you can check out the current price over here on Amazon!

A Way To Get The Original Fragrance For A Little Cheaper

A clone of a certain fragrance can give you a great impression of what a fragrance might smell like. However, a fragrance clone will never be the same as the original one. And in the case of Creed Erolfa, there really isn’t an accurate clone. Luckily, you can also try out the original Creed Erolfa without paying for a full bottle.

The way to do this is to purchase a decant. A decant is a small bottle, usually 5ml or 10ml, filled up with the original fragrance, in this case, Creed Erolfa. This way, you can try out the fragrance without having to pay for a full bottle. These decants are usually pretty cheap, depending on the fragrance you purchase.

Purchasing these decants is the perfect way to try out the original fragrance for a little less. From there you can decide whether or not you’re going to pay for a full bottle. If you’d like to learn more about decants and where to purchase them, you can read this article I wrote here!