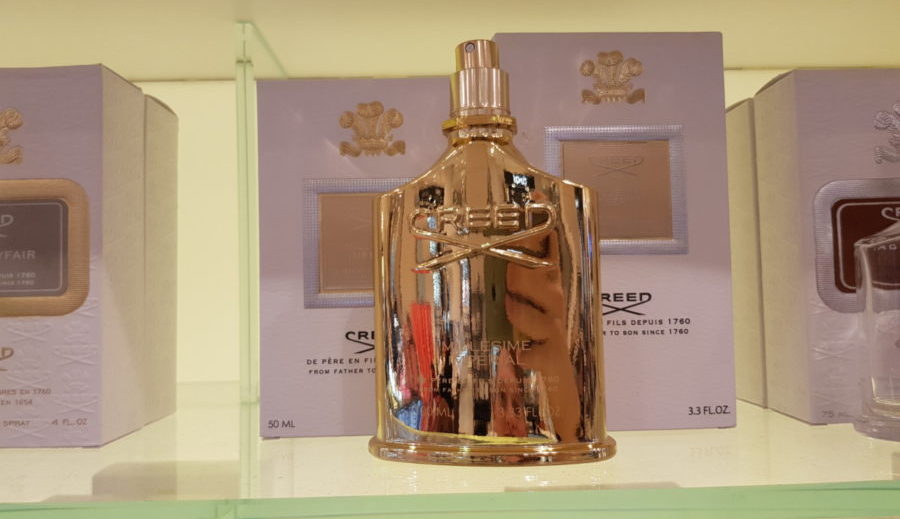 The Scent Of Creed Millesime Imperial

Creed Millesime Imperial is a fragrance known for its fantastic mix between a sweet and salty scent. This fragrance is a fantastic fragrance to wear during the summer.

The original inspiration for Creed Millesime Imperial is the refreshing scents you get from citrus groves near a seaside palace. This scent is perfectly captured in this bottle. You get a fresh, fruity scent with a salty touch, resembling the ocean or the sea.

The top notes of Creed Millesime Imperial are bergamot, green mandarin, and lemon. The middle note is iris. The base notes are sandalwood, amber, and musk.

The opening of this fragrance provides it with an incredibly fresh and fruity scent. The iris as the middle note gives this fresh, fruity opening a sweet touch. Then, you get the warmth of amber, the freshness of the sandalwood, and of course, the saltiness from the musk.

The overall combination of the sweet fruits and the salty touch makes for an incredible summer fragrance. Many people would love to have this fragrance, however, it is quite expensive. This high price deters many people away from actually purchasing this gem. That’s why many people instead go for a clone of this fragrance.

There are many fantastic fragrances on the market. Often times, they are priced reasonably, but sometimes, the prices can be extremely high. More than most are willing to pay. But the sad thing is that these fragrances usually have a fantastic scent. It would be a shame to miss out on those.

That’s where fragrance clones come in. Many companies create a fragrance that is very similar to these expensive fragrances. Often times, they get extremely close, but they sell these clones for a much cheaper price.

Scent: Sean John Unforgivable is a fantastically fruity, fresh, and summery fragrance. The opening is very fresh and fruity with a hint of salt in there as well. It almost smells like fruits near the ocean. When this fragrance starts to dry down, it becomes much sweeter and warmer. This gives the fragrance a very similar vibe to Creed Millesime Imperial.

Notes: The top notes of Sean John Unforgivable are basil, citrus, and lavender. The middle notes are sea moss, cashmere, iris, and clary sage. The base notes are sandalwood, amber, and tonka bean.

Why it is so similar: Sean John Unforgivable is arguably the best clone for Creed Millesime Imperial. The opening is nearly identical. Both have this ocean side, fruity scent with a much warmer, sweeter dry down. Although this fragrance is not the exact same, it does come extremely close. From start to finish, you’ll have a hard time deciding which fragrance is the original. If you’re interested in this fragrance, you can check it out over here on Amazon!

Scent: Ed Hardy Love And Luck is a very strong, fruity fragrance with a musky touch. The opening of this fragrance is really fresh and fruity. This then dries down to a more refined version of this fruity scent. It gets a nice floral touch, as well as an absinthe touch. The dry down is a nice musky, slightly woody one. This gives the fragrance a fresh, musky ending, while still maintaining the fruitiness.

Notes: The top notes of Ed Hardy Love And Luck are bergamot, orange, mandarin, and cardamom. The middle notes are absinthe, sage, cypress, and violet. The base notes are musk, cedarwood, vetiver, and agarwood.

Why it is so similar: Ed Hardy Love And Luck has a very similar vibe and scent to that of Creed Millesime Imperial. Especially the fruitiness. Although Ed Hardy Love And Luck doesn’t have the same salty tone, it does have a nice musky touch, which creates a very similar effect. Overall, this fragrance has a very similar fruity scent with the same vibe as Creed Millesime Imperial. It is a great alternative, but it does miss the salty touch. It is extremely inexpensive though, you can check out the current price over here on Amazon!

Scent: Mancera Wild Fruits is a very summery, fresh fragrance with a clean, fruity, almost soapy scent. Although you get a bunch of different scents, you mainly get the fruity scent. This fruity scent is a really nice, fresh, and sweet scent that is mixed perfectly. When this fruity scent dries down, you start to get a nice musky, woody base.

Why it is so similar: Sean John Unforgivable Black is, just like the original Sean John Unforgivable, a fantastic clone of Creed Millesime Imperial. This fragrance still has a very similar opening, being fruity and fresh, with quite a similar dry down as well. There is the iris which provides sweetness, and there is still this salty vibe to it. If you’re interested in this fragrance, you can check it out over here on Amazon!

A Way To Get The Original Fragrance For A Little Cheaper

Collecting fragrances can become quite an expensive hobby. Especially when you start getting into the more expensive fragrances, like the fragrances from Creed. Although they smell fantastic, their price is pretty high. Which is a shame, really, because it deters many people away from these fantastic fragrances.

The scent of Creed Millesime Imperial is fantastic. Many people thoroughly enjoy the scent, but the high price deters them from actually purchasing them. That’s where fragrance clones come in. These clones are usually way cheaper, yet still, have a very similar scent. These clones are not replacements though. They’re more like alternatives.